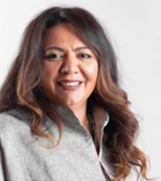 Ms. Amal Esmat joined Banque du Caire as Non-Executive Chairman on 1 January 2018. Ms. Esmat has more than 20 years of banking experience, mostly with Citigroup in the Middle East. In her last assignment with Citi, she was the Middle East Regional Risk Management Head for Citigroup Global Markets Limited - Dubai from 2006 to 2016. Prior to that, she was the deputy Regional Risk Management Head for the Middle East based in Bahrain from 2005 to 2006. Ms. Esmat joined Citibank in Cairo in 1997 as a Relationship Manager in the Corporate Banking Team. In 2003, she joined the Risk Management group under the Credit Risk Analytics Department Head for Citibank Egypt. Prior to Citi, Ms. Esmat had worked for three years as a Project Finance Officer with Export Development Bank of Egypt. Aside from her banking career, which focused mostly on Corporate Banking and Credit Risk Management, she conducted audits on numerous bank branches in Africa, the Middle East, North Africa, and London.

Ms. Esmat holds an MBA in International Banking and Finance from the University of Birmingham, UK and a BSc in Chemical Engineering from Cairo University.