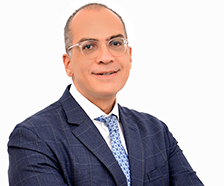 Mr. Bahaa has represented (Qatar National Bank) as member of the Boards of Directors of several tourism, hotel, petroleum and asset management companies.

Mr. Bahaa has worked for several years as President of (Project Financing & Structural Funding) at (Qatar National Bank), during which he arranged and managed several large joint loans for greater projects at the various Sectors of Economy in Egypt, including the Petroleum, Petrochemicals, Communications, Building Materials Sectors and such other huge national projects, which necessitated coordination among several Egyptian & Foreign Banks.

Mr. Bahaa has assumed leadership of the team work of several agencies, including the Principal Coordinator, the Financing Agent, the Security Agent, the Local Agent of Foreign Banks and others for several huge joint loans.

During his career, he passed several specialized training courses in the fields of credit, investment, risks and leaders qualification, the most important of which was the (Credit Course) & the (Investment Portfolio Management Course) at the American University in Cairo and a specialized course in the (Investment Risks Assessment) at Harvard University in the United States of America.